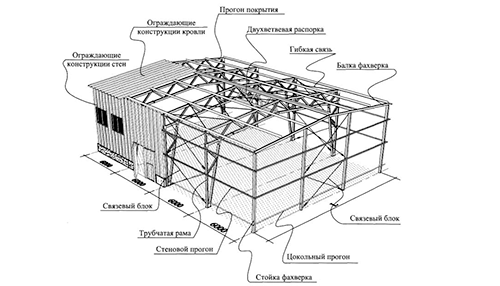 Production technology of prefabricated buildings is the modern trend that has gripped almost all areas of construction.

Its main advantages are fast delivery of objects in operation and their low cost compared to conventional methods..


The building of "UNITEK" is made according to the standard construction of the series 1.420.3-36.03 "Skeletons of steel "Unitech" which was developed by the design firm "Unikon" (Moscow) on the instructions of JSC Uraltrubprom.

Single-storey industrial buildings (heated and unheated) as without cranes, and overhead cranes with lifting capacity from 1 to 5 t with the modes of 1K-5K with non-aggressive or slightly aggressive environment with relative indoor humidity not over 70%.

III;VI and V district by the weight of the snow cover
III and IV district on the wind pressure
I1-II5 district on the climatic conditions of the construction
In areas with an estimated seismicity up to 6 points inclusive

The main bearing structures of the frames UNITEK are end-to-end single - and multi-frame of profile pipes according to GOST 30245-2003.
Step the main load-bearing structures of 6 m. If necessary, when large vertical loads (snow bag, etc.) step frames may be reduced by agreement with the manufacturer — JSC Uraltrubprom.

Pairing designs extreme post-frames with Foundation – jointed; the middle stands frames and stands Fachwerk – hard.
Resistance and geometric resistance of a building is provided in the transverse direction by the bearing frames, in the longitudinal direction – a system of vertical ties and struts.
The hardness of the coating is ensured by the system of horizontal ties and braces to bolt the frame; the rigidity of the end walls – a system of vertical linkages and struts on racks of timber-framing.

Runs coating made according to the split scheme. Step runs, the coverage shall be equal to 1.5 or 3.0 m, depending on the load on the cover and the bearing capacity of roof walling. Section runs cover taken from rolled and bent channels.
Runs walls are made by split scheme. Step wall runs assigned from 1.2 to 3.0 m multiple of 0.6 m in accordance with the location of Windows, gates and other openings, and depending on the vertical and horizontal loads and the bearing capacity of wall enclosing structures.
Section of wall runs taken from rolled and roll-formed channels and of the bent and welded pipe.
Horizontal and vertical connections on the frame and half-timbered cross from flexible steel that is installed with pre-tension or without tension.

Spacers between the frames are of 2 types:
- Dvuhvetvevym lattice type of notowanych pipes (braced blocks);
- Odnovolova of the profile tubes.

Allowed use of flexible stretch marks is obnovljivih struts on the lower zones of the crossbars of the frames, except braced blocks.
All factory connections – welded. Mounting connections on the sleeves and on the normal and highly durable bolts.

As enclosing structures for buildings like UNITEK can apply a variety of solutions.
One of the most common — laminated wall and roof panels "sandwich".

The advantages of working with JSC "Uraltekhmarket"

JSC "URALTEKHMARKET" is a team of qualified professionals.
The main objective of which is acquisition of enterprises products.
We work with companies in all sectors hozyayst.
Take on the role of OMTS.
Specilities in a more focused segment, we guarantee the optimum solution of tasks of any complexity.
This approach allows to minimize the cost of materials and logistics.